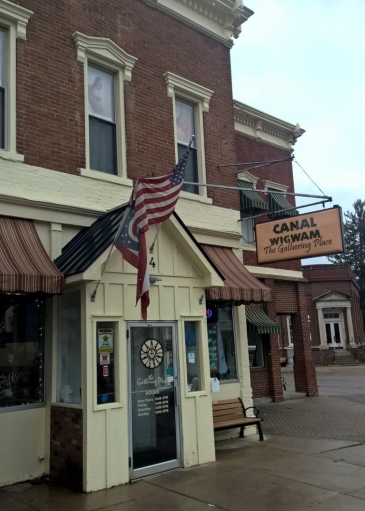 Canal Wigwam has long been a fixture in downtown Canal Winchester.

After celebrating our own 150th anniversary last year, we wanted our first Business Spotlight of 2018 to feature a business with its own rich history and we didn’t have to look far.  Originally opened in 1899, The Canal Wigwam is known throughout the region as the perfect gathering place for locals and visitors in Canal Winchester.  But its century-plus old history has not been without a hitch; a fire in 2014 threatened the existence of our beloved local business.

Owners Mark and Angela Savino purchased Canal Wigwam in 2011, very quickly after learning the business was going up for sale.  Mark had been looking for a business opportunity in the Central Ohio food industry, and the timing couldn’t have been any better.  With his familiarity of the industry, passion for food, and the assistance of our Canal Banking Center, Mark jumped on the opportunity almost immediately.  “I heard about it going up for sale in February (2011), and we actually closed on June 1, 2011!”  Mark said with a smile.

Mark grew up in the food business – his grandfather owned a grocery store in western Ohio, which Mark, his father and family continued and evolved through the years. Mark eventually came to Canal Winchester in the banking industry but he always had his eye on getting back into the industry in which he worked with his family.  The Canal Wigwam opportunity was too good to pass up and it seemed to be smooth sailing once taking ownership.

That was, until Friday, December 5, 2014.  A fire started in the wiring in the ceiling while a packed house enjoyed their food, friends, and conversation.  Mark recounts “It was serious.  We had to go.  We did what we could, but it was time to get out.”  The fire was severe enough to warrant a shut down lasting nearly eight months.  It was devastating to the business and the community alike.  Especially considering the timing. 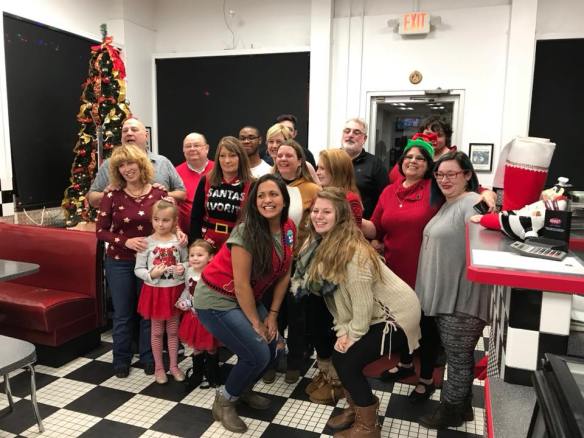 The restaurant hosts a Christmas party for employees every year!

“It was Christmas time, obviously.”  Mark recalls.  “And Canal Wigwam had a large catering event that very night.  We had to buy all new inventory and supplies – serving dishes, food, you name it.”  And, in a true show of support, the City of Canal Winchester granted Mark’s crew permission to use the Community Center kitchen to cook and prepare for this event, which unbelievably, given the events of the day was a success.

But that wasn’t the only event impacted.  Mark and Angela annually throw a Christmas party in the restaurant for the employees. Now they had this event to worry about in addition to the status of the business and general well-being of the employees.

“The impact on the employees was significant, and it was important to continue the Christmas gathering so that we could come together and laugh despite the tragedy” explained Mark.  Again, working with the City of Canal Winchester, the Christmas party was moved to the  Community Center.  Because the community was also affected by the fire, Mark and Angela extended an open invitation to join in the festivities.

Everyone associated with the restaurant was overwhelmed by the support they were shown.  The Community Center was filled with friends and enough food to feed a City, as all brought a treat to share.  Canal Winchester Human Services provided Christmas baskets to all of the employees.  A GoFundMe account was set up by a customer, and an account was set up at our Canal Banking Center strictly for Canal Wigwam staff support.  By February, that account had reached over $9,000!  “The support we were shown was unbelievable.  Everyone who works at the Canal Wigwam think of our customers as family, and clearly the community mirrored the sentiment.  All who responded were incredibly generous and kind.  The response was humbling and healing, and continues to have an impact on me and Angela.”

The rebuild was not easy.  Facing multiple difficulties in construction and coding updates, insurance, ownership, etc., the project took longer than expected.  Mark continued to press on, eventually working toward gaining ownership of the building.  After months of delay, Brocon Construction was hired to finish the physical repair and rebuild project.  Finally, the project began to gain traction, and was essentially finished about seven weeks after beginning.  Mark was thrilled, crediting Brocon President, Bud Bropst, who “kept things on track with a dedicated and qualified staff and weekly project meetings.”

Raised ceilings, updated lighting, revamped bathrooms and updated equipment are just some of the physical improvements.  Staff updates were also needed.  Seven months-plus was a long time to be without work, and there were employees that had found good jobs elsewhere.  While Mark hated losing them, he was happy to see them land on their feet.

After time spent learning the new equipment and adjusting everything within the diner to their liking, it was time for a grand re-opening on July 31, 2015.  It was a tremendous success.  “We were swamped!  And we stayed swamped for two months straight!” Mark recalls.  “The community support during and after has been awesome!”

Since the re-opening, business is up dramatically.  Canal Wigwam employs about eighteen employees, its catering business is continually increasing, and the diner continues to serve up incredibly delicious, simple, affordable meals for breakfast and lunch daily, and dinner on Fridays.

Have breakfast and lunch at the Wigwam most days but enjoy dinner on Friday night!

A visitor recently stopped Mark to shake his hand in the middle of the restaurant one afternoon.  “I assume you’re the owner?  I see you here all the time…” the gentleman started.  “I just want to commend you for the way you run your business.  You don’t know me, but I came across town, across the county to eat here and I wanted to tell you this.  You don’t cut corners.  Everything you serve is top notch – from the potatoes on down.  I just wanted to tell you that I appreciate that.  You don’t cut corners and I know it’s hard to run a small business.  I wanted you to know that.”
“Thank you.  My father would kill me if I didn’t do it right!”  Mark responded with a smile.

In 2001, 102 years after their original opening, it was written that “Canal Winchester just wouldn’t be the same without the Wigwam Restaurant.” Another seventeen years later, and the statement is still so very true.  Canal Wigwam is an icon in this tight knit Central Ohio community, and we’re thrilled to have their business!