Since its inception in 1867, The Vinton County National Bank has stood tall as a community-centered organization, serving local communities by providing personalized loan and deposit services to individuals and local businesses. Now with 17 locations in seven Central and Southern Ohio counties, community service and financial donations in the areas where we live and work continue to be an important part of our bank culture.

In 2015, after adding the Franklin County Banking Center in Grove City to our financial family, an opportunity was presented to us to contribute to a project near and dear to the heart of many Grove City residents.  The Grove City Little League’s Project Dream Field, as it was being called, had been underway for a several years and was beginning to enter the home stretch.

The project’s goal?  The development of an accessible field to provide opportunities for children with disabilities to play baseball, regardless of their abilities.  After researching the Little League’s efforts and their proposed plan, VCNB was proud to present the Little League with a $3,000 donation toward the Dream Field earlier this month.  Grove City Little League Executive Board Member Jack Widner recently agreed to talk to us in depth about the project and shared some exciting news about the grand opening.

Tell me about the objective of the Dream Field project.
In 2012, the Mayor of Grove City came to a group of Grove City citizens and asked them to resurrect the Grove City Little League.  The group of men, some of who played in the previously-disbanded league’s first games in the 1950’s, were happy to get involved in bringing Little League back to Grove City.  After they were able get to the league back up and running in 2013, the GCLL Board of Directors heard about a previous effort to bring a miracle field to Grove City.  That plan never came to fruition, so they decided they would like to try and make it happen.  The Board met with the City of Grove City, who pledged to help fund the project if the GCLL Board could raise $252,000. 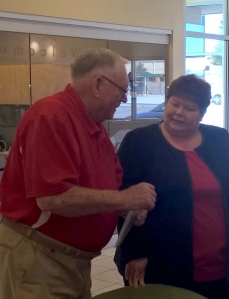 How many children do you think this will benefit in the Grove City area?  Is your aim beyond this area?
A new baseball group has formed out of the creation of the Dream Field: “Buddy Ball at Grove City Dream Field.”  The Buddy Ball baseball group will be in charge of putting together a league for children to be able to play baseball at the field.  They initially thought they would have six to seven teams of children with different needs.  However, since word has gotten out about the new field, we have received requests from teams as far away as Jackson, Ohio and London, Ohio to host games at the Dream Field.  It’s hard to tell exactly how many children will be served by the field – but we expect to draw children from a big chunk of Central Ohio and Southern Ohio.

I know a similar program in Dublin has been helpful in this project.  Did you model this off of another project specifically or was it a combination of various influences?
It was a combination of things that led us to develop this project.  We did talk to the organizers of the Dublin field, who were very helpful, and found out that they are serving over 47 zip codes and are having difficulty keeping up with the demand for the field.  There are 219 of these fields in the United States, and we thought the success of that particular field showed us there is certainly a demand for this here.

Tell us why you’re so passionate about the project and who is working on it with you.
When the Board of Directors had fulfilled its mission of bringing back Little League to Grove City, we were looking for a way that we could continue to give back to our community.  Once we saw the need, and the response the community had to our efforts, we knew we had to see this through.  Each of the Board members is looking forward to driving by that field and seeing children of all abilities able to enjoy the game of baseball.

It seems the community has really been on board with this – how much of your goal have you been able to raise and how were you able to do so?
Once word got out about the Board’s efforts to bring this project to fruition, the community was very supportive.  We had Girl Scouts, Cheerleaders and various service groups help raise money for the field.  The Grove City Community Club has been extremely generous to the Dream Field. Three gentlemen generously included Dream Field contributions in their obituaries:  Coach Ernie Plank, Dick Robinson, and Jim O’Connor.  One very successful fundraiser was hosted by Planks in Downtown Grove City which brought in around $5,800.  Most of the community’s fundraising efforts came in smaller amounts – but every penny counted in helping us reach and then surpass our goal.  Mount Carmel, the Mirolo Foundation, and the Chamber of Commerce’s Leadership Class were very supportive.  Because of support from the community, we have raised over $550,000, all private funds!

I understand the Grove City Dream Field Specialty License Plate was created via Senate Bill 159, introduced by State Senator John Hughes and Representative Cheryl Grossman.  The next step is its discussion in the Ohio House of Representatives.  If all goes according to plan, proceeds from this specialty plate will help with the Dream Field upkeep.  What can you tell me?
Yes, that bill is still in the process of being approved.  Once it is, the license plate will cost $25.  $15 dollars will go back to support Buddy Ball and help offset their costs.  We need a minimum of 500 license plates sold each year to keep the program available.

So this whole concept really got going in 2013, correct?
Yes.  After the Board got Little League up and running in 2012, they moved on to bringing a Dream Field to Grove City.

…And you were able to break ground in June of 2015.  That’s a pretty quick turnaround from concept to construction.  How far along are you in construction and when is your expected completion date?
The field is complete and will be ready for play on opening day May 7.  Many items are still being added to the facility, however, such as water misters that were donated by Elks Lodge 37 and a scoreboard that was purchased by the Grove City Community Club.  The parking lot is being completed and the accompanying building with restrooms, changing tables, concessions, storage will be wonderful.  A new shelter house is planned to be built this Summer.

I heard there are plans for a universal playground next to the facility; is this accurate?  Was this always a part of the plan?
Because of the additional money that was raised, we were able to incorporate this into the project.  We expect to break ground on the universal playground this spring, with completion in early fall.

Do you have any marketing materials or videos you could share with us for our blog?
There is a great video on our Facebook page and the City of Grove City has been tracking progress of the project.  Karen Fahy in the community affairs division has been taking pictures all along the way of the building of the field along with a lot of the fundraisers we have had.

Well Jack, we certainly appreciate you taking the time to discuss the Dream Field and we look forward to the grand opening on May 7!
Thank you so much!