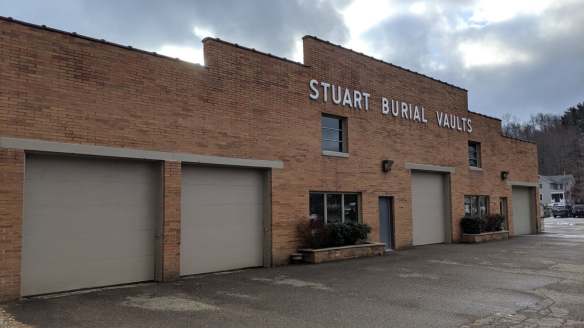 This month’s Small Business Spotlight is with a business that recently celebrated its 100th anniversary. While they provide a service that most people need at some point in their lifetime, it isn’t the kind of business most of us frequent or even know exists.

It’s not really. The company in question is Stuart Burial Vaults, a family owned business that is still in their original building in Bremen.

“The vault is not what the public sees.  They know us for the tent they see when they arrive to the site in the funeral procession” says John Boone who is just the fifth owner of the 100 year old business.  “We take pride in the vaults we make as well as helping to provide a tasteful presentation for family and friends who want to honor their loved ones.”

Stuart Burial Vaults was started by John Stuart, a contractor and businessman who was making a name for himself in the early 1900s through his quality of work and his 9-bag mix of concrete.  As his reputation grew so did the size and importance of his projects.  He worked on bridges and roadways throughout the county that long outlived their expected lifecycle. He was even asked to consult with the construction of the Hoover Dam in Nevada!  Stuart was able to send his son to be on-site during the construction while he stayed home to run the vault business he created in 1919. 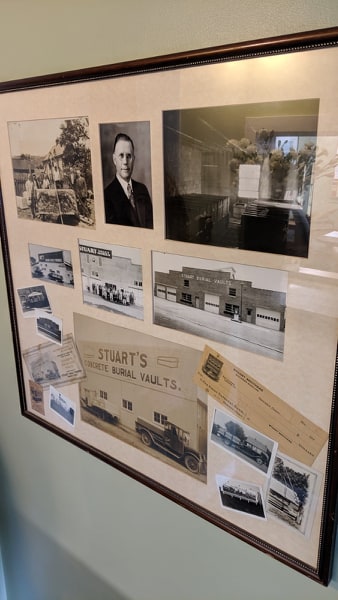 Stuart Burial Vaults was actually one of the first four concrete vault businesses in the country.  In addition to creating and running the business, John Stuart was also a founding member of the National Burial Vault Association, which helped establish industry wide guidelines and standards.

“Just like Mr. Stuart 100 years ago, we work hard and take pride in what we do and we’re proud of it” John Boone beamed.

To say there is more than meets the eye to the business would be an understatement.  It’s not commonly known, but the customer base for a vault company is primarily made up of funeral directors.  Funeral directors order directly from the vault company. Then John and his team arrange for the delivery of the vault, the set-up of the presentation as well as the installment, tear-down, and return afterwards.

John estimates there are five appointments on the schedule of a typical day.  However, there have been more than twenty scheduled for a single day in the past. While this is a challenge, he credits his team’s professionalism and determination for always making it work out.  “If it can be done, we’ll find a way.  It’s amazing – we always work it out!”

Stuart Burial Vaults has nine trucks, a fleet of “buggies” for vault transport, and eleven employees on staff in addition to John.  John is tasked with orders, logistics, billing, and much of the day-to-day business dealings but he credits Foreman Delbert Hammer for making the business operate smoothly. “These guys are my heroes” John says repeatedly when referring to his team. “And Delbert is critical to our business.”

On days with fewer appointments, the crew works on creating and maintaining inventory.  That way, when they do have couple of days or weeks with busy schedules, they have the inventory to fulfill orders.

“The crew of guys we have now has been with me for years.  They can go out and wrestle a 2,000 pound vault in a muddy cemetery – handling it safely – and still have to bring a nice white tent back to me after it’s all said and done.  We have to have our tent look like this (points to pristine white tent in a photo) on a cold, wet, rainy, muddy, snowy day and still bring it back looking like this.”“They’re always on call.  Saturdays, holidays, bad days, good days.  We’re always on call just like police or doctors or firefighters.  These guys are my heroes.”

John first joined the Stuart team when he was sixteen and has spent most of his life in the business.  Now in his fifties, he owns the business after a lifetime of watching the industry and society evolve.  Cultural and societal shifts, insurance costs and coverage, costs associated with materials, and the wants and needs of funeral directors are things that have impacted the business.  “It didn’t change a bit for eighty years!  And now in the last decade things are changing quickly… but at the end of the day, it’s cement, sand, water, and gravel for us.  And it always will be.”

In addition to crediting his staff, John also credits his customers for the sustained success of the century year old business.

Stuart Burial Vaults is located at 527 Ford Street, on their original site in Bremen. Visit their website to learn more. Friendly Bremen Banking Center and the VCNB financial family would like to congratulate John and his staff, and all of the previous owners and employees on reaching such a milestone!