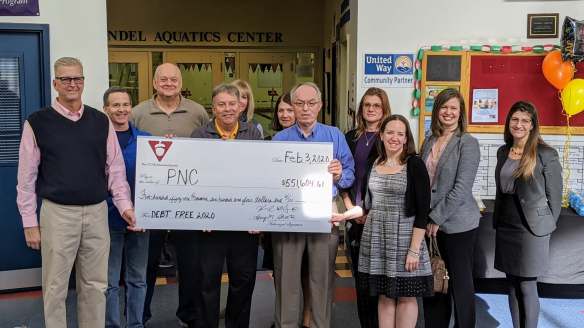 The Robert K. Fox Family YMCA in Fairfield County was one of the first stories in our Small Business Spotlight series. Many exciting things have happened here since that first spotlight in 2015.

The latest and most exciting piece of news is that theorganization heads into this new decade debt-free!  That’s right – the loan taken out for their nearly twenty year improvement project was paid off at the beginning of this year thanks in large part to the generosity of an anonymous donor who has been contributing to the cause for nearly a decade.  This project officially got under way in 2000, allowing for the expansion and renovation of the main campus. Paying it off has allowed the program – and its personnel – to breathe a little easier.

CFO Kerry Sheets recalled how it came about.  “I remember it was Christmas time in 2013, which is already a stressful time.  And an individual approached our office and said they wanted to help.”  The donor laid out a plan and committed monies on the spot – seven payments over seven years to be exact.

“I cried.  Oh, I cried” Kerry recalled.  Without this donor, the YMCA in 2008 would have faced some hard decisions.  Operating funds were being set aside in order to ensure payment of the huge loan they had undertaken, and expenses were being evaluated.  After the donor’s offer, the situation essentially changed overnight.  “And sure enough, I woke up, came in one morning, and there is a donation check waiting for us.”  This continued six additional times, and was a key factor in the Y’s ability to celebrate their “Debt-Free 2020.”

In addition to paying off the loan, they also recently opened the River Valley Campus (RVC) branch, a brand new second location created in partnership with Fairfield Medical Center.  Officially opening in September 2019, the RVC was a years-long project that evolved far beyond the initial concept.

“We were approached initially by Fairfield Medical Center who were in the planning stages and they had some ideas about child care” said Robert K. Family Fox YMCA’s CEO, Howard Long.  The YMCA was intrigued by the potential partnership, so as the ideas began to flow and the model for what the medical center could be began to evolve, so too did the Y’s involvement in the project.

“We all have the same goals.  We just want the community to be healthy” explained Howard.  It made the partnership a no brainer, and what came out of it was a brand new, fully functional YMCA facility, operated and maintained by YMCA employees.

From day one the public response to the spacious facility and the latest and greatest in exercise science equipment has been nothing but positive.  “It’s been an amazing partnership” Howard beamed, before referring to the value the new facility adds for Fairfield Medical Center, the YMCA, and their members.  “Our brand has a value and that was recognized.  Our logo is prominently displayed.  It’s fully functional – a brand new second branch.  It’s instant value for our members!”

The RVC has quickly become a model for YMCA programs across the state to follow.  “I’m taking calls and meetings all the time” said Howard.  “They want to know how we did it, and this is really a model of how to do it right.”

But Y members will be happy to know that the newest locationisn’t the only facility getting all of the attention.  The main branch’s Wellness Center has seen updated carpeting, equipment, and HVAC systems, and the RecPlex continues to see growth.  The gymnastics program, in particular, has seen explosive growth and now requires the use of the facility’s second floor.  Additionally, their childcare program has grown significantly and has expanded into the former Sanderson Elementary School building.

This physical growth and expansion is in addition to program success – old and new – at the Y.  For example, Darkness to Light, a newer offering featuring the Stewards to Children program that Howard has been involved with since before his arrival to Fairfield County in 2018, helps adults learn how to prevent, recognize, and react responsibly to child sexual abuse.  To date, 253 adults have been trained through this program in Fairfield County. Our strong partnership with the Harcum House and United Way have made this program possible.

To say that the staff here is pleased with this growth would be an understatement.

However, all of the success and growth of the Robert K. Family Fox YMCA program would not be possible without the numerous donors and partners that contribute a tremendousamount of support.

Someone else who played a huge role in the YMCA we know today was the organization’s namesake – Dr. Robert and Dorothy Fox. “Without the Fox family and their foundation, the (main campus) addition wouldn’t exist.  We truly wouldn’t be where we are today without the generosity of them and their continued financial support,” Kerry said.

Donations from the community go directly into the Y’s Annual Giving Campaign (AGC), which topped $210,000 in 2019.  As part of that $210k, over $10,000 came from the generosity of the selfless YMCA staff members themselves.  Fittingly, the success of the AGC meant that the YMCA turned no one away in 2019 for their inability to pay.

If you’re interested in joining the Robert K. Family Fox YMCA, consider their Better Together program – a referral program that can earn you a savings of 20 percent.  For more information, contact Annie Weaver at 740.654.0616 x234 or at aweaver@ymcalancaster.org.

For full information on the Robert K. Fox Family YMCA and their programs, visit them online and follow all their latest happenings on Facebook.