In honor of our 150th anniversary in 2017 we are taking a look back at bank history and the people who have helped to shape our bank into the successful, secure institution that it is today. Read on to learn about one of our former presidents! 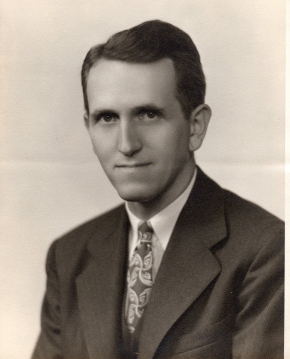 A lifelong McArthur resident, Robert Sr. was a prominent citizen of the community whose personal history was closely entwined with the bank’s history like many other members of the Will family both before and since.

He was born to Aaron Will Jr. and Blanche Buskirk Will on June 15, 1906. He married Helen Burson Will with whom he had two children, Robert B. Will Jr. and Sara Will Crow.

Robert Sr. graduated from McArthur High School and attended Ohio University. He was a member of Trinity Episcopal Church in McArthur, various sportsmens’ organization, the Ohio Bankers Association, the Square and Compass Club of Ohio University and was an Advanced Conservationist.

In addition, he was prominently identified with the Masonic bodies of two counties. He was a member of Delta Lodge No. 207, F. & A.M. of McArthur, McArthur Chapter, Royal Arch Masons of McArthur, Wellston Council No. 120, R. & S.M. of Wellston and Jackson Commandery 53, Knights Templar of Jackson and Scioto Consistory, Scottish Rite.

Robert Sr. served as bank President from 1951 until his death in November 1965. An avid sportsman, Robert Sr. suffered a fatal heart attack while hunting with close friend John Gill, owner of Gill’s Chevrolet in McArthur.

During his tenure, the bank building was remodeled and enlarged in 1952 and again in 1964. This second renovation brought about the back lobby known as a Quick-Service Lobby, a one-window drive-in and the present brick frontage. The drive-in window was cutting edge for its time and provided customers a convenient, fast way to conduct simple bank transactions without exiting the car.

He also acquired the former Gill’s Chevrolet lot which he turned into a customer parking lot, providing customers ample opportunity to park and bank in addition to the on-the-go service offered at the drive-in.

Another contribution that Robert Sr. made to the bank, which is still felt today, is the creation of the bank’s Management Trainee Program. A student at the Rutgers University Graduate School of Banking, Robert Sr. wrote his graduate paper on how to recruit talented college graduates at community banks. His idea was to recruit the best and brightest young people and to give them challenging work. This program has produced a number of the bank’s finest leaders over the decades and the program continues to leave its mark on the bank more than sixty years since its inception.

Learn more about our 150th year here and about Bank Presidents Daniel Will , Aaron Will and John L. Will.  Find details on our 150th Anniversary Bash in McArthur here.