Our bank was born less than two years after the Civil war ended. At the time, the country was still recovering from war and the town of McArthur was a booming place that needed a bank. As it turns out, two banks opened that same year. The Vinton County Bank opened in January 1867 and the bank of Will, Brown and Company opened shortly after. The following year, the two banks merged to form one, keeping the name of the first bank while adopting the leadership of the second.

It’s a story we have told a lot this year as Vinton County National Bank has celebrated its 150th anniversary throughout 2017.

In a few weeks, we’ll have our biggest celebration in our hometown over the 4th of July weekend. We have partnered with the Vinton County High School Athletic Boosters to help them with their annual 4th of July celebration. In doing so, we’re sponsoring a concert by Nashville recording artist Jason Michael Carroll, sponsoring a big hot rod and vintage car show and a host of other things. There will be an open house at the bank and we’ll be offering free wagon rides with John Hutchinson following the parade where we are the grand marshals! Thanks to the Boosters for allowing us this honor!

On Sunday we’re doing something extra special. The Boosters were kind enough to make this Vinton County National Bank Day at the Festival. While they’re having tournament games, vendors and food, we’ll be doing something a little different by embracing our post-Civil War roots. Here’s what we’ve got going on starting at 1 p.m.: 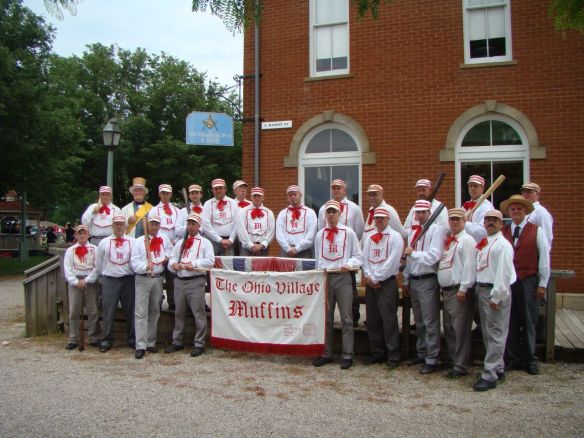 19th Century Ball Games – Have you ever thought about how baseball was originally played? The Ohio Village Muffins Men’s Baseball Team and the Ohio Village Diamonds Women’s Team will put on a good show as they play bankers and other community members in nineteenth century style games! The ladies play in skirts and the gentlemen play in long sleeve wool shirts! They didn’t have mitts or protective gear back then and they played by much different rules than we have today! An announcer explains the rules and etiquette and helps spectators understand what’s going on! The ladies play at 1 p.m. and the gentlemen at 3 p.m.

Reenactors and Music – Have you ever wanted to meet a President? Ohio’s Premier Abraham Lincoln impersonator will be joining us to talk with folks and pose for pictures. We also have Ohio native General George Armstrong Custer coming for the day and a reenactor who will set up camp, talk with folks about the life of a soldier, do some demonstrations and pose for pictures. Finally, Ohio musician Steve Ball will join us for the day. He and his wife play Civil War era music on period instruments. They do a beautiful job and will surely provide some good entertainment for us all.

Giveaways – The first 150 kids to arrive that day will receive a commemorative 150th piggy bank. One of those banks will contain $25 to help one lucky youngster jump start their savings! We’ll also have some giveaways for adults.

Travis West and OSU Extension will be there to offer old fashioned games for kids and the Vinton County High School Athletic Boosters will be selling ice cream sundaes in addition to all the other fun activities and food the Boosters are planning!

Bring some sunscreen, a lawn chair and a few bucks if you want to buy lunch or snacks. We’ll take care of the entertainment! Visitors will also have access to restrooms inside the high school as well as a shady spot under our big tent to relax and enjoy the day. Want to know about other things happening that weekend? Click here to learn more about what we’re doing and check out the full festival schedule below! 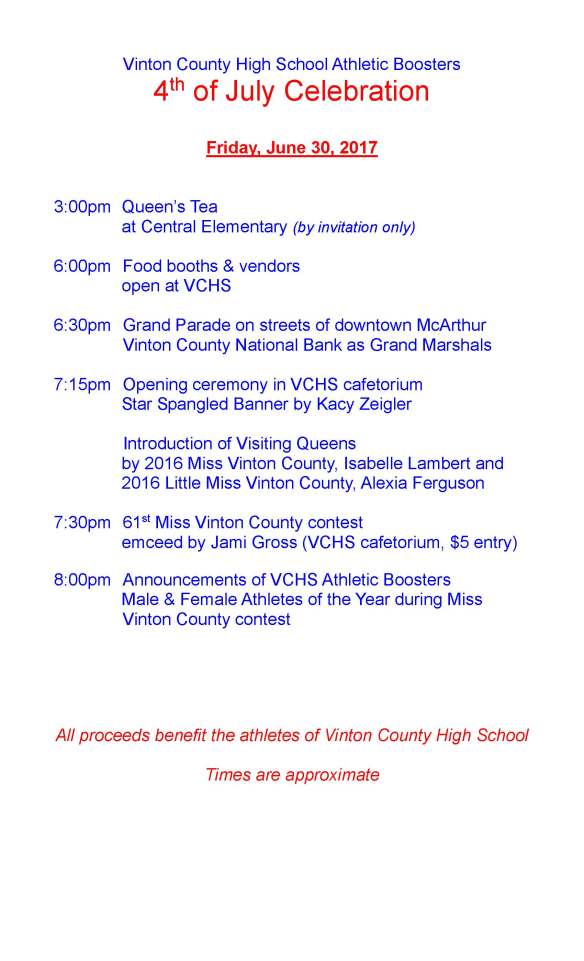 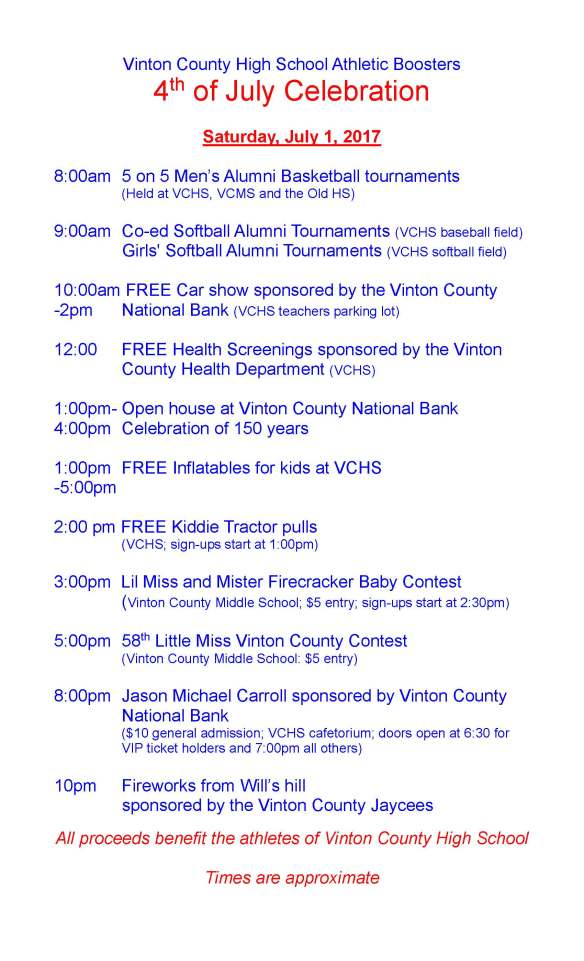