This antique photo features a number of Jerry Albright’s relatives and many others from the community who worked in logging and sawmills in Vinton County.

Ask Jerry Albright to talk about his work and two things are clear: he loves what he does and he knows his business. The founder of Albright Saw Company has officially been in business since 1979 but his experience started when he was a teenager just helping out his dad, Johnny.

Today he owns the Frick brand of sawmills, one of the best known and oldest sawmill brands in the country. They manufacture, sell and service sawmills but that’s just the tip of the saw blade when it comes to describing what they do.

To understand the Albright story, it’s important to go back a few generations. “My great grandpa, my grandpa and my dad all worked in sawmills. They sawed, logged, farmed. They were just like everyone else, they did whatever they had to do to make a living,” Jerry said before describing his own upbringing in Vinton County, being raised by his parents, Ruth and Johnny Albright.

The family lived on Pretty Run Road, near where his business is located today. With six kids to support, Jerry’s dad farmed and owned a sawmill before eventually teaching himself the art of saw hammering. This is the technique used to straighten a saw. It’s done with an eight pound hammer, an 800 pound anvil and a two foot long straightedge. His dad was known as the man to see if you had trouble with a sawmill.

In that day, dozens of sawmilling operations across Vinton County provided a large nearby customer base. He did this work during the day and worked nights for Dale Riddle’s mill and the teenaged Jerry helped where he could. “I was lucky to grow up around it and it just came easy to me. I was lucky to come from a family that taught us to work hard,” he said.

Today, Jerry has a reputation much like his father’s. “I like being the one that can fix it, the one you call when no one else can figure out the problem,” he said.

That reputation was hard earned. Over 41 years Jerry has built a customer base of thousands, taking him all over the country to hammer saws and to fix sawmill troubles.

He had been selling products for big brands when opportunity knocked in 1993. That’s when Jerry contacted Frick, in hopes of becoming a distributor. However, the company was for sale and new distributors weren’t being sought.

On a whim, he asked for a price. Realizing it was a fair price and good opportunity to buy the operation including all the blueprints, patterns, copyrights, equipment, molds and parts, he visited the Mississippi based facility and then the bank for financing. Within a short amount of time he was the proud owner of a brand that had been manufacturing trusted sawmills since 1875.

The rest, as they say, is history. 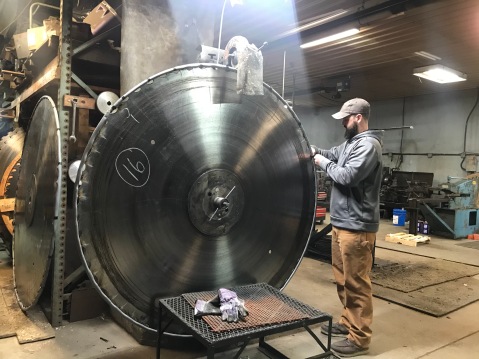 Jerrod Albright continues the family tradition, learning alongside his dad.

Since then, his company has supplied Frick sawmills to operations in 35 states including South Carolina, Oklahoma, Tennessee and many points in between. Add in the parts distribution and saw hammering services and he has done business in 45 states and three Canadian provinces.

While there are a number of sawmill brands on the market, he said his mills are known for precision at an affordable price. “We can do the same volume as the other guy but more accurate and for less money.”

Today, there are just two other businesses in Ohio that do similar work hammering saws. “There aren’t a lot of us around,” he said.

What’s truly fascinating about Jerry Albright is that he’s able to speak so knowledgeably about how the machines work, the science involved in how a saw blade turns, and the computers used to run a modern sawmill that it would be easy to assume he has extensive formal training. But the Vinton County High School alum just laughs and shakes his head when asked about how he became so informed about everything from physics to engineering. “I’ve blown up a lot of stuff!” he exclaimed. “And I’m not really kidding. You learn a lot by doing,” he laughed.

All that experience has come in handy, helping thousands of customers across the country as well as some customers of his competitors. “I’m sort of a thorn in their side,” he said of his competitors while recalling one very expensive sawmill that wouldn’t work. The manufacturer wouldn’t help the new owner and the owners were desperate to get their new investment working.

Jerry was able to identify the issues in one visit, order parts and go back another day to oversee part replacement, adjustments and repairs. “I’ve never seen anyone as depressed as that sawmill owner when I got there. By midnight just a few days later we had it running right,” he said. With millions invested in a mill that didn’t work, the owner might have lost everything on this endeavor if not for Jerry’s years of expertise.

He has also shared his knowledge with countless sawyers, the person who operates the mill. One example is Shawn Cramer, an employee of the Zaleski State Forest. The state forest had a Frick sawmill which was destroyed by fire in recent years. Albright built the new sawmill that replaced it. He has been teaching the crew that operates it.

“There were one or two of us out there with some experience but the rest of us were greener than grass. He’s given us direction and helped us understand things better and helped us learn from our mistakes,” Cramer said. “He’s been nothing but helpful.”

Jerry is proud to say that the timber used for the new Lake Hope State Park Lodge was sawn by the Zaleski State Forest crew on a Frick sawmill. “When I visit, they let me play a little so, a couple of those beams in the lodge, I sawed myself. If you look up at the beams some of them have been sanded down and you’ll see the words Zaleski State Forest burned into them.”

Jerry also is known for a saw sharpener that he designed for accurate, safe and easy use. 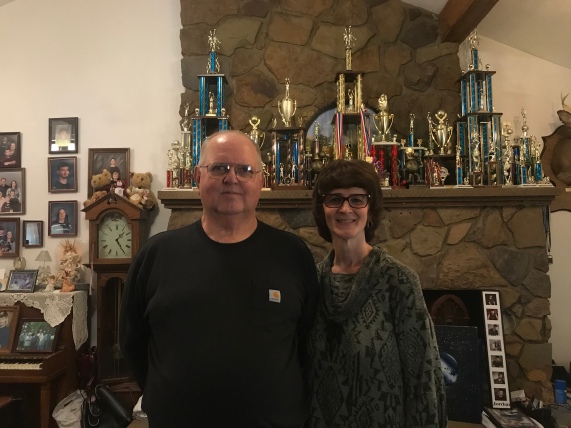 At home with Jerry and Debbie Albright. The couple have been married forty years and are known for their involvement in the community.

Debbie, his wife of forty years, smiles as her husband speaks of his business. “He’s so much fun to listen to and, I know he thinks I’m crazy when I say this but he practically glows when he talks about his work. I don’t know many people who get that truly excited about their work,” she said. “But sometimes I think he’s happiest on the phone troubleshooting someone’s problem or looking for a solution,” she said before describing her husband’s tendency to go the extra mile for customers.

“Over the years, with smaller operations where these guys can’t afford an expensive breakdown, he’ll be out scavenging for parts, looking for a good way to solve their problem so they can get back to work,” she said.

Another interesting twist in his story is that Jerry has assisted the Bureau of Workers’ Compensation in two states with identifying ways to make sawmills safer. Historically, the industry has been dangerous and some of Jerry’s own relatives have been injured or killed in sawmill and logging accidents. Today he is working to make the industry safer for a new generation of workers.

Jerry and Debbie have three grown children – Angie who helped with the books through high school and college; Jerrod who now does the hammering; and Jordan who is studying Business at Rio Grande College and works in the office on breaks and creates digital concepts of drawings of sawmills. Son-in-law, Chad Hafner, has worked weekends at the Londonderry location.

They also have two grandsons, Michael and Matthew, who Debbie says are “dying to get into the sawmill business.” The two teens have been helping their grandfather since they were tots just big enough to hold a broom or a paint brush. “I’ll put them to work painting parts or something. They just like to help,” he said.

The pair beam as they talk about their family and of how they have been able to employ lots of family over the years. “All of my brothers but one, nephews, nieces and brothers-in-law. My sister has been my bookkeeper for years. It really is a family affair and that’s important, I think.”

“I’ve been lucky to have been able to hire many friends, neighbors and relatives over the years to produce quality equipment, and that has helped me stay in business over forty years,” he added.

Today, the company employs ten people and last year they manufactured about a dozen sawmills. Jerry said they stay as busy as he wants to be given that it is important to him that they have free time for family. When their kids were in school, Albright coached youth basketball, baseball and softball for thirty consecutive years.

When son Jerrod competed on an international traveling basketball team, his team competed once in Australia. Debbie and Jerry went with the team, taking along Jordan who was just a toddler at the time. Debbie recounted how the team coach was ejected from the game after a few warnings. Without a coach they faced disqualification so Jerry stepped up to coach the last few minutes of the game. “It was just a few minutes but for a while there I was an international coach,” he laughed.

“I am a lucky man. The people I have met, the people I do business with, they’re the best people in the world. You won’t meet nicer people,” he said “And I’ve been able to make a living doing something I enjoy. Helping people, fixing things, doing the things that no one else around knows how to do,” he said. “I am fortunate.”