Talk to Dan Clary about his family’s business for very long and it’s easy to understand the company’s values. Family, hard work, honesty and fairness are not just words in a mission statement but a way of life for the owners and employees of Clary Trucking.

The company is now celebrating its 71st year in business and has grown by leaps and bounds since Dan’s grandpa Jesse Clary, Sr. bought his first truck to haul school coal in 1947. Today the fourth generation family business has an impressive fleet of iconic red Kenworth trucks but they maintain a strong connection to where they have come from and the values that have made them successful.

It all started in 1947 when Jesse Clary Sr. bought that first truck to haul school coal. The next year he bought an International wrecker truck to use for towing services. Then in 1956, on his sixteenth birthday, Jesse Clary, Jr. acquired his driver’s license and began hauling aggregate material and household coal. “Grandpa was a mechanic and happy to do what he did. He was comfortable in his own skin but he didn’t want to deal much with people,” Dan explained. “But he told dad, if he wanted to deal with people, he could do more.”

That’s when the company began to grow. When Jesse Sr. passed away in 1970, the company was hauling coal and was transporting base material for the construction of Route 32, the Appalachian Highway, which cuts through several southern Ohio counties. 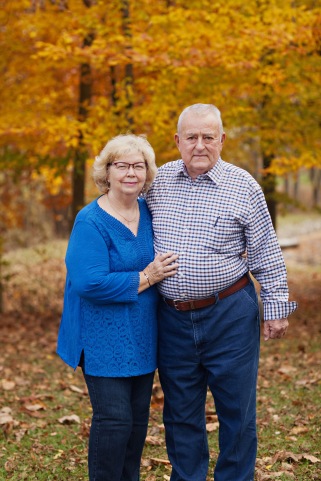 Jesse and Patricia Clary are revered by their family for the work they have done to grow the business.

His dad Jesse and mom Patricia grew the business to fifteen trucks that hauled coal, foundry sand and asphalt. Their three children, Rick, Dan and Jackie all joined the family business in the seventies and, by 1978, Clary Trucking had outgrown their location, causing them to move into a new, larger facility in Richmond Dale.

“Mom and Dad did everything by themselves for years, until us kids came of age and could help,” Dan recalled with admiration. “Mom did the bookkeeping at the house and answered the phone. All while they were raising the kids. Dad likes to tell the story that he had six dollars in his pocket when they got married and that’s all the money they had.”

Dan credits his hardworking parents for building the business on a strong foundation and for instilling in their kids and grandkids the value of hard work and growing the business smartly. Jesse Jr. and Patricia have been married for sixty years and, as a team, helped the business grow to what it is today.

And what it is today is impressive.

In 2003 the company had grown so much it moved to a new, larger facility on Eastern Avenue in Chillicothe. Among other things, the facility has a welcoming office space, warehousing and cross-docking capabilities.

With more than fifty trucks and over 130 trailers, Clary Trucking now employs 54 people, including ten who are Clary family. Dan’s sister Jackie, wife Jody, nephew Ben and son’s Scott and John are all part of the operation.

“We have a good crew of people here. We couldn’t do it without them,” Dan continued. “We have good people and good customers and we learn how to get along with everyone to make it work. One of the best parts of the business is having the family here and that we get along. We don’t fuss and fight. We all pitch in and, for the most part, we’re all pretty universal. We can do each other’s jobs. If it takes extra effort to make something work, you’ve just gotta do it.”

Dan talked about the effect this attitude has on the morale of employees. The drivers notice that the family shows up and works just like they do. “One guy told me once ‘you work with us. You don’t just show up and go home.’ And that’s true. We aren’t living a high life. We live pretty modestly and we work hard to be where we are. We’re not out buying race cars or anything like that,” he laughed.

Dan takes pride in how they do everything in-house. From accounting to mechanics to technology and everything in between, they are completely self-sufficient. “We want things to be done right. It’s that simple. We have found that if we want it done our way, it’s a lot easier to just do it,” Dan observed.

He also emphasized the importance of the company’s good reputation and of doing the right thing, pointing out that they have worked hard to diversify the business and investments to stay on firm financial ground. “You never want to find yourself in the position that you can’t afford to do the right thing. It hasn’t always been easy but we do our best to do the right thing,” he emphasized. “I tell our drivers, it’s not a sin to make a mistake. It is a sin to not own up to it so we can make it right with the customer.”

While some might say they are old fashioned, the Clary family stands by the values that got them to where they are today.

“I want to see us get to a hundred years. But that won’t happen without work. When I was eighteen, I thought growing the business was the hard part and it would be easy once we got there,” Dan reminisced. “I know now it takes as much effort to stay here as it took to get here and we are grateful every day.”

Today, about fifty percent of their business is outside of Ohio and their regular routes include Louisville, Detroit, Charleston, South Carolina and Roanoke, Virginia. “We have grown a lot through our customers because they need something and you have to take care of your customers. You never want to say no if you don’t have to,” Dan explained.

Along with that growth has come countless changes, especially in technology used for operations and for managing their fleet of trucks on the road every day. “Dad, he’s amazed by it, by how much has changed and how quickly it changes,” he acknowledged.

But as they say – the more things change, the more they stay the same. Family and hard work are as important today as they were in 1947 when Jesse Sr. bought that first truck.

At 77 years young, Jesse and Patricia are semi-retired but Jesse still drives a truck whenever he can. They spend part of their year in Florida with their pride and joy – their dog Daisy. The pair have six grandchildren and seven great grandchildren.

“We’re grateful to be here working and for the people we work with. We’re grateful that everyone is healthy and happy and that we can still be here. It’s been a great life,” Dan said.